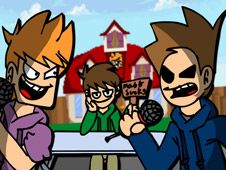 What is Eddsworlds Funky Beats?

Tord is a character from the Eddsworld series that has already got his own FNF mod online, and since that one had been very well received, talented creators thought it would be a great idea to bring the other members of the cast into the fun, which is why you can now play and have tons of fun with the game called Eddsworlds Funky Beats!

Can you defeat all the Eddsworlds characters in a battle of rhythm?

In the game, you act as Tom, and your opponent is going to be Matt, and you do it over the three Week 6 songs that this mod replaces, which are fan-favorite, so we're positive you will enjoy them plenty.

Press arrow keys when the same arrow symbols above your character match one another, since that and timing the notes is how you get to the end of the song and win.

Be careful not to tap the wrong keys or tap at the wrong time, since too many notes missed in a row means you also lose the game and have to start all over again.

Good luck, enjoy, and make sure to tell your friends about our wonderful new FNF Games also, they will love it here!