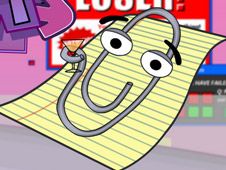 What is Fine Night Funkout VS Clippy?

Clippy used to be the virtual assistant from Microsoft Office meant to help new users learn how to use the various programs in the software pack, and he is now the newest antagonist that Boyfriend has to face off in musical battles, right here and now in the amazing FNF mod called Fine Night Funkout VS Clippy, which has cool animation, awesome sprites, and hella fun music!

Don't worry about the seemingly random updates that appear during the playing of the mod, since they are not harmful to your computer, but instead are in-game references to the pop-ups that used to appear in the software back in the day, and they are meant to simulate the experience of using it.

Boyfriend Vs Clippy: A Funkout Showdown!

Unlike most full week FNF mods, this one has even more tracks for you to play and have fun with, seven in total, and they are:

As the song plays in the background, you have to match the notes of it with Boyfriend so that you reach the end of the song, and if the progress bar is in your favor, you win. To play the notes, use the arrow keys on your keyboard, pressing them when the same arrows from the screen match one another above BF.

Know that missing to play too many of the song's notes in a row causes you to lose, so be careful not to let it happen! Good luck, enjoy, and we hope to see you playing even more of our fantastic new games of the day!