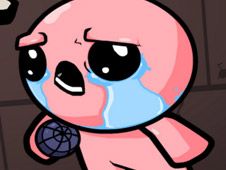 What is Friday Night Funkin vs Isaac?

For all the many fans of Friday Night Funkin Games online on our website, we're back, as right at this moment our administrative team is delighted to share with you the game called Friday Night Funkin vs Isaac, where Boyfriend is going up against the main stickman character of the flash game known as Binding of Isaac, and there is no doubt in our minds that it is going to be lots of fun from start to finish, especially since it features a new custom song called Sacrificial.

With good rhythm and your help, Boyfriend will defeat Isaac!

To win the rhythm battle you need to use the arrow keys, pressing them when the arrow symbols floating all around Boyfriend match with one another, so that you play and sing the songs according to their charts. Once the progress bar is in your favor and you've reached the end of the song, you've won.

Be careful not to tap the keys at the wrong times too many times one after another, because if that happens you will have played the song too wrong, and you lose, so be careful. Good luck!