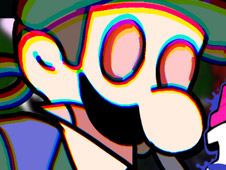 What is FNF vs Weegee 2 Invasion?

The previous FNF Weegee Mod that had been added on our website was received very well, something that does not surprise us, considering that Weegee is the most popular meme version of Luigi from Super Mario Bros, and his custom song was very cool and fun, which is why you should be excited for the FNF vs Weegee 2 Invasion mod, where he brings along even more awesome music:

Just like in the other games of the series, you need to reach the end of the songs and turn the progress bar in your favor to achieve that, and you can play in either the Story Mode or the Free Play mode, it's up to you.

When the arrow symbols above BF match above his head, press the same arrow key on your keyboard to play that note from the song's chart. Be careful not to miss too many notes in a row, since that happening means losing the game.

We wish you all the best, good luck, and we hope to see you try out even more of the amazing new FNF mods coming here today, only for you!