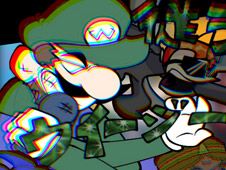 What is FNF vs YTP Invasion (Weegee V4)?

The cursed creepypasta version of Luigi is back in our FNF Games category, and you are once again invited to go up against him, this time on three new songs, even harder than the ones you used to know:

Defeat Weegee with the power of your music!

After choosing between the story mode and free play mode, give it your best to reach the end of the songs by playing all the notes when Boyfriend's turn comes, since that is how you win. This means that you have to press arrow keys at the same time as the identical arrows match above BF's head.

Be careful about missing the notes, because if that happens too many times in a row, you lose and have to start again from scratch. Good luck, we wish you the best, as usual!