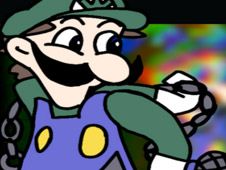 What is Friday Night Funkin vs Weegee?

Meme culture and FNF Games online sort of go hand-in-hand, as there are lots of mods out here that feature all sorts of original characters from the internet or that have been taken from memes, just like it is the case right now with the Friday Night Funkin vs Weegee mod, one of the newest games we want you to play here!

Weegee: a throwback of internet past

Most of are probably too young to remember Weegee, but he is a poorly-drawn version of the Luigi character in the Super Mario Bros series, a plumber with a green hat, overalls, and a mustache, and this version of the character taken from a DOS game used to be put and photoshopped into pictures to create a sense of cringe, and this meme used to hunt the internet in the 2000s. You will now have a rhythm battle against it, and we hope you win!

How to play this FNF Weegee mod:

What you will have to do is hit all of the notes to the Weegee song at the right times, which is when the arrows floating on the screen match one another, so not one second later or sooner, press the same key on your keyboard to get the timing right, and if you turn the bar green, you win, but having too many misses in a row will cause you to lose, so be careful!