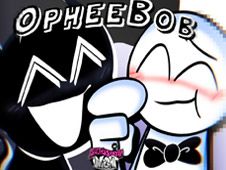 What is FNF Bob vs Opheebob?

Boyfriend and Girlfriend sometimes take a step back and let other characters shine in the world of Friday Night Funkin' Games online, just like it is the case right now when we are delighted to share with everyone the game called FNF Bob vs Opheebob.

This is a spin-off from Salty's Sunday Night, one of the best mods we've had here so far, where one of its characters, Bob, is now going to battle his girlfriend in a rhythm battle, with her being called Opheebob.

Help this new protagonist win the musical battle of love on the following songs:

When you see that arrow symbols are matching above your character, it is at that time that you also have to press the very same keys on the keyboard, so that you hit the notes of the songs at the right time, with the goal being to reach the end of the songs with the progress bar in your favor, and win.

Don't press the keys too early or too late, since that counts as a miss, and if you make too many misses in a row, you lose the whole game and have to start again. Enjoy!