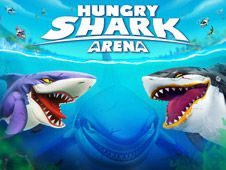 What is Hungry Shark Arena 2?

These days there are no more popular games to try out than battle royale games online, and some of them can be played directly from your browsers, and some of them, just like this one, is not about shooting enemies with guns or anything like that but has a unique premise.

In Hungry Shark Arena, you become a shark that will be thrown in the ocean together with other sharks, and they are also controlled by various players all over the world. And, you all have the same goal, which is to eat, not get eaten!

Become the top shark in the world, right now!

You will use the mouse to swim around the ocean, where you have to eat sharks that are smaller than you, grow bigger, and then keep killing and eating bigger prey, with the shark that becomes the biggest and the strongest also climbing up in the rankings. To kill another shark, dash through it!

You can also dash through the water and jump above it to eat flying birds, or, if you're strong enough, dash through multiple sharks in one go, simple like that. It's a game of survival where you try to always get the upper hand on all the other players and reach the top rankings, something we wish you all the best towards!