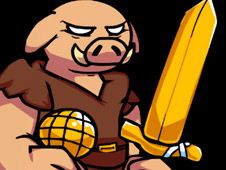 What is FNF vs Piglin?

A Piglin is a pig-like humanoid from Minecraft who is seen carrying around a golden sword, but since this is FNF, he also is carrying around a golden microphone, and this is because he has to battle all of the intruders into his pixelated world, one of them being Boyfriend, who you will now help out to defeat the Piglin and get back to his own world!

There are three custom song based off of Minecraft in this game, and they are:

How to defeat Piglin from Minecraft:

Well, first of all, be focused so that your rhythm is on time! When you see the arrow symbols above BF match one another, press the very same arrow keys to match them, and if you do this until the song ends, you've won.

Be careful not to press the keys too early, too late, or press them at wrong times, since that is a miss, and if you make multiple misses in a row, you lose the whole game.

Good luck to you all, as always, we wish you the best, and we want to invite you to stick around and play even more awesome games like these ones!