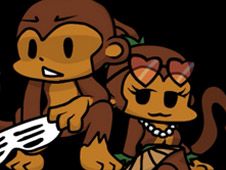 What is FnF vs Monkey?

We have really loved every other of the FNF mods with animals online that we've brought you before, and we are definitely excited to be doing it once more right now as well when our team invites each and every one of you to have endless fun with the game called FnF vs Monkey, where BF has ended up in the jungle, where it seems that even the monkeys know him, so they will now battle it out through music, and they do it on three custom songs you will adore:

Challenge the FNF monkeys, and show them the power of human rhythm!

As per usual, pick between the story mode or free play mode, and then, when your turn comes in the songs, press the same arrow keys as the same arrow symbols that match above BF's head. If you do that until the end of the song, you become the winner, but be careful not to miss too many notes in a row, because that means losing the game.

The rules are that simple, so now that you're familiar with them, give the game your best, and have fun!