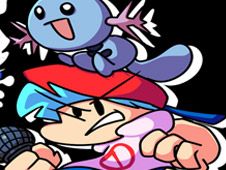 What is FNF vs Pokemon Wooper?

Boyfriend stumbled into the safari zone of Pokemon, where he met a Wooper, one of the cutest water Pokemon in the entire world of pocket monsters, and he is now trying to capture it. As you know from previous FNF Games with Pokemon, you don't throw balls at it, but sick beats and bars, as you have to defeat this pokemon in a music battle on the following custom songs:

Catch Wooper with the power of music!

When you see arrow symbols above BF's head matched with one another, at that time you will have to press the same arrow keys, and you need to keep doing it until the song ends in order to win, because that is how you follow the chart, and if you reach the conclusion, you are the winner.

Be careful not to miss pressing the keys too many times in a row, because if you do that, you will have to start again. Also, you can duel this Pokemon in either the story mode or free play mode, so pick one, and then start giving this game your best!