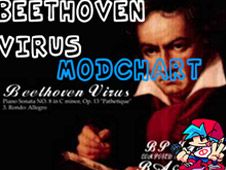 What is FNF: Beethoven Virus with ModChart?

Even classical music and artists such as Beethoven are welcomed into the Friday Night Funkin' Games series, which is why our team is delighted that right at this moment we could share with you all the game called FNF: Beethoven Virus with ModChart, where you go up against this classic composer in a virus song that even has its own mod chart.

Watch and focus for when the arrow symbols above BF's head match with one another, and at that moment, press the same arrow keys on the keyboard and keep doing it until the song ends to win.

This would also mean that if you miss pressing the keys too many times in a row, you are going to lose and will have to start the game all over again from scratch. Enjoy!