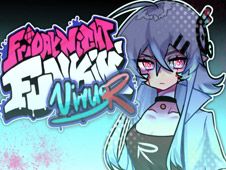 What is FNF vs Virus R?

Virus R looks like quite a very cute anime girl, but do not let yourself be fooled, since she is still a very dangerous computer virus, one that you have to defeat right now in a rhythm battle on the following songs:

BF Vs Virus R, a new FNF confrontation with music and technology!

Whether you choose to play the game in the story mode or free play mode, win by playing your notes according to the charts until the songs conclude. To do it, watch when arrow symbols match above BF, and when they do, press the identical arrow keys at the very same time.

Be careful not to fail to do that too many times in a row, because if that happens, you lose and have to start again from scratch. Good luck, enjoy!