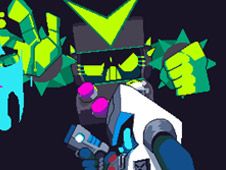 What is FNF Mad Virus Attack vs 8-Bit?

8-Bit is a new robotic opponent for Boyfriend's musical abilities, whom we now invite you to defeat on the song called Disco, with this amazing new FNF Mad Virus Attack mod!

Defeat 8-Bit in FNF and stop the Mad Virus Attack!

When you see floating arrow symbols match above BF's head, that is when you need to press the identical arrow keys to hit your notes, doing it until the song's conclusion to win. Press keys early, late, or the wrong ones and you miss notes, so don't miss too many in a row, you will lose. Good luck, enjoy!