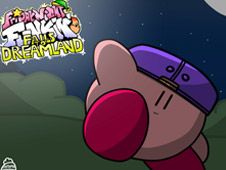 What is FNF: BF+GF Fall’s to DreamLand?

Once again, Boyfriend and Girlfriend somehow ended up in DreamLand, which is a cute and cozy place, but, they still want to go back to their universe, which is why they will have to defeat inhabitants of this land to come back, meaning Kirby, of course, as well as Maglor, and you will do it on four original tracks unlike you have played with these characters before:

Win the rap battles to return from DreamLand!

You can choose to play this full week mod in either the story mode or the free play mode, that choice is yours, and for each of them you've got the same goal, and that is reaching the end of the songs by playing all their notes at the right time in the charts, otherwise, you lose.

This means that when arrow symbols are matching above BF's head, you will have to press the same arrow keys. If you press the wrong keys or press the correct ones too late or too early, that is a miss, and multiple consecutive misses mean you lose. Enjoy!