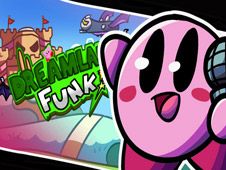 What is FNF vs Kirby in Dreamland Funk!?

Play FNF vs Kirby in Dreamland Funk! for a brand new musical experience against this beloved video game character, since we know for a fact that all of the previous games to have featured him here have been played countless times, and with this one you enter his world and have a rap battle on three awesome custom songs:

Let's have an FNF vs Kirby battle in Dreamland Funk!

Whether you play in the story mode or free play mode, the only way to win in both cases is to reach the end of the songs by playing all their notes according to the charts. To play notes you press arrow keys at the same time as the identical arrow symbols float and match above BF's head. If you miss hitting said notes too many times in a row, you lose and have to start again from scratch. Enjoy!