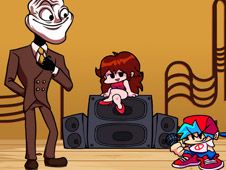 What is FNF vs Mr. Trololo?

Mr. Trololo is a combination of the real-life singer by the same name from Russia who ended up becoming a meme and a troll face character, who you and Boyfriend will now have to face off against in a rhythm battle, something that you will do on the following custom songs:

Of course, as usual, from the main menu you will pick between the story mode and free play mode, and, then, either way, you have to play the notes of the songs at the right time in their charts, winning once you've reached their end.

To do this, when arrow symbols above BF match one another, you have to swoop in and press the same arrow keys yourself and keep at it until the song ends to become the winner.

Know that if you miss pressing the keys multiple times in a row, you end up losing and having to start again, and this is not something we wish for you, of course!