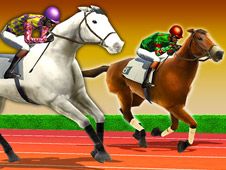 What is Horse Derby Racing?

We always thought that there should be more horse racing games online 3d, even more so if they are also two-player games at the same moment, games where you get to race a horse either against a computer or against another real player, just like you get to do right now with the awesome addition of Horse Derby Racing!

Be fast as the wind to win the horse derby!

After picking between the 1p mode and the 2p mode, for which we think you will pick the second, choose the jockey and horse you want to control, and then start racing through tournaments on all the continents of the world, such as the Americas, Europe, Asia, Australia, Antarctica, and Africa, and you can even go to Planet Mars!

One player uses the A, D keys, while the other one uses the Right, Left arrow keys, with you having to repeatedly tap on them as much as possible to gain speed, having to overtake both the other player, as well as the other jockeys and horses in the race, which will be computer-controlled.

Start the racing and the fun right now, and don't hesitate even for a second not to play even more games in two, only on our website!

Use the right, left arrow keys, and the A, D keys.