Slendrina Must Die The House

Your Turn To Die 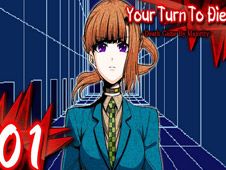 What is Your Turn To Die?

Your Turn To Die is a really cool original game with anime aesthetics where you have to survive for as long as possible, where people are trapped in a death game where their fate is decided by a majority vote, so if you're too hated, you might get chosen by the other characters to DIE!

Avoid your turn to die for as long as possible!

The game utilizes the format of visual novels, where you can end up with multiple endings, depending on the choices you make along the way, and the answers that you give.

Try to see how far you can get, with our team wishing that you will reach the end, survive, and have tons of fun with this game unlike anything else you've played here before!

Use the arrow keys, enter key, or the mouse.