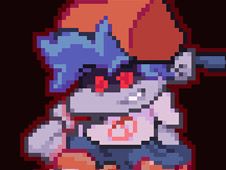 We know you already know about Sonic.Exe, the evil version of Sonic the Hedgehog, but it seems that now a BF.Exe has appeared, an evil and pixelated version of our beloved main character in FNF, and you now have to act as BF and defeat it, since he does not want this version of him out there, with you doing this on the song known as 'Confronting Yourself'!

Boyfriend Vs Boyfriend.Exe, a battle for identity!

Hit the play button to start, and, then, help BF reach the end of the song by playing all of his notes when his turn in the chart comes, since that is the only way to win.

Watch for when the floating arrows match above his head and press the same arrow keys at the same time. Make sure not to miss doing it multiple times in a row, since that leads to you losing the whole game. Enjoy!