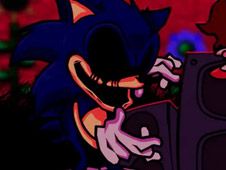 What is FNF vs Immortal Sonic.exe?

Sonic.Exe is now even more dangerous in the world of FNF Games, now that he has become immortal, but that is not also true for his reputation, so try to kill it right now by helping BF defeat him on the following songs:

BF Vs Immortal Sonic.Exe, a battle for musical eternity!

In either the story mode or free play mode, winning is achieved identically, which means hitting your notes according to the charts until you reach the conclusion of the songs. This means pressing arrow keys at the same time as the identical arrow symbols float and match above BF.

If you miss doing it too many times in a row, you end up losing and having to start again from scratch, so focus not to let it happen but win instead. All the best we wish you all!