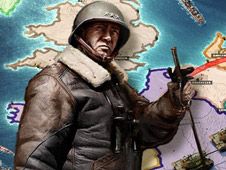 What is Call of War: World War II?

Let's continue our journey through the history of wars, at least the recent wars, with the strategy and military game you can now play free of charge on our website, a game called Call of War: World War II, which is a sequel to Supremacy 1914, and while this one is also inspired by the real-life events of the war that took place between '39 to '45, anything can happen, anyone can win, since players from all over the world take part in this war, representing the nation of their choice!

Considering that this was a war between most of the world's nations, it makes sense that here you would take part on battlefields that can take place on the ground, with soldiers and their weapons, in the air, where airplanes fight one another and shoot each other from the sky, or you can take part in naval battles on the sea. Shoot, crash, and sink the enemies!

You will take control of a nation's military power on all these fronts, with the big nations all taking parts, such as the United States of America, Germany, Russia, Great Britain, France, Italy, Poland, Japan, and many others. You choose your nation or province and can battle up to 100 other players on the same map of the Earth.

One very interesting aspect of this game is that it's not one where the campaigns and missions you take part in are simulated on the fly and go by very fast, as one skirmish with another country can take up to weeks, so create your user profile, or log in to your existing one, coming back every day to continue your missions!

Get the upper hand on the enemy nations and conquer them!

Everyone knows that while war is a terrible thing, and not one anyone wishes for, it usually represents a moment in time of innovation, as a lot of technology is developed in wars, so that each country can get advantages over the other ones. Do that here as well, where you try to develop new weapons and tech, while you should also not forget about classic strategies such as spying on your enemies, forging alliances, or simply conquering territory.

Take part in the biggest world the war has ever known, so far!

Try to develop the biggest army possible, defeat enemy armies and take over their powers and resources, explore and conquer as many maps as possible, or develop nuclear bombs and use them for a swift victory. The better you perform in each campaign, the more you will climb in the rankings of players, where we hope you will always aim for victory and the top spot!