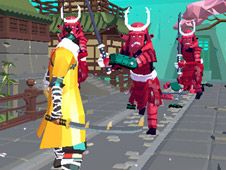 Our team hopes that boys all over the world who visit our website day after day get the chance to play the games they are most interested in, which are games with action, fighting, and adventure, just like it is the case right now with Hero 2: Katana, where you also get the setting of Feudal Japan, with its awesome samurai who wield katanas, all rendered in 3d as well, making it even better!

Are you ready to become the hero of the samurai?

In each level, you will have a target of enemies that you have to defeat in a sword battle, and they come in various power levels as well as sizes, so focus your strength accordingly to be able to defeat them all!

No matter how difficult to defeat and powerful your foes get down the way, you will also grow into a better samurai with each battle you win, and surely have tons of fun, just like we've had!