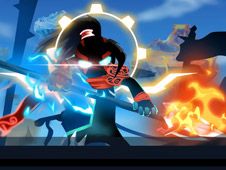 What is Stickman Hero Fight?

Welcome to Stickman Hero Fight, thrilling new action and fighting game with stickmen, where you get to become one of two heroes, one a man, one a woman, meaning Zhao Yun and Da Qiao, and no matter who you choose, you will face against an onslaught of swordsmen, archers, magicians from the enemy camp, as well as monsters and creatures, since this land you enter combines medieval Asian history with fantasy elements and magic!

Fight with the Stickman Hero and defeat the forces of evil!

Use the A, D keys to move left and right, with the game using 2D side-scroller gameplay and visuals, and move through each location while you defeat the enemies you encounter. Use the J, K, L, O, P keys to perform various attacks, but only a few are available from the start, with the more powerful techniques needing to be unblocked as you gain experience.

Always level up your stick hero to be able to face bigger threats. After you use an attack, it will take time to recharge. If you're playing on a phone or tablet, you tap on the attacks you use, each having its own icon, and you use the touch controls to move.

As you defeat enemy soldiers, they leave treasure chests behind, so make sure to open them up to get rewarded with coins that you can use for upgrades, or you might receive weapons and upgrades directly, being able to use them in the next battle right away.

As you keep getting better as a hero, your enemies also increase in strength and size, so be ready to face anything and everything, and never give up, in true hero fashion!