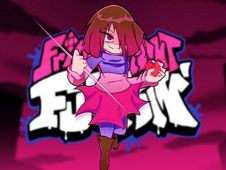 What is FNF vs Betty Noire?

Betty Noire from Glitchtale is now in FNF, and you have to go up against her on a single song called 'Smile', which we are positive you will help BF and this character bring to the end while having tons and tons of fun together!

Boyfriend and Betty Noire, the FNF x Glitchtale crossover you were waiting for!

As the song progresses, watch for the moment when arrow symbols float and match above BF's head, a moment when you have to press the identical arrow keys, something you have to keep doing until the end of the song to win.

This means that if you miss hitting too many of the notes in a row, you have messed up the song too much, and you lose, so be careful not to let it happen, but win! Enjoy!