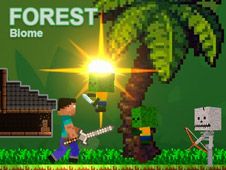 What is Noob Vs Zombies Forest Biome?

The war of Noob vs Zombies moves into the Forest Biome right now with one of the best new action-adventure games to have been added into our Minecraft Games category, where we are always making sure to come over with some of the best new games on the internet, and since previous Noob Games have not disappointed, this one won't either!

Let's help the Noob face the zombies in the forest biome!

With your Steve-like Noob character you will move through the forest, where you have to defeat the various zombies you meet in battle, all the while making sure not to get killed by losing all your lives.

Instead, collect diamonds and use them in the shop to buy new weapons or skins, and you should also make sure to not fall into traps, obstacles, or pits, and lose that way.

Move with WASD, jump with space, use E to fire/attack, shift to run, I for inventory. The world is a big one with plenty of fun levels, one more fun than the other, and we are sure that you won't be disappointed by any of them!