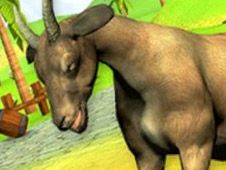 What is Angry Goat Revenge?

Angry Goat Revenge is not the kind of animal game 3d that you get to see just every day, which is why we hope that none of the visitors of our website will miss out on it, because they would only be missing out on a really awesome time to be had!

Help the Angry Goat make its revenge a reality!

First, to do that, you need to know how to control it, so here are your keys: W to move forward, S to move backward, A to move left, D to move right, the spacebar to jump. Use F, Z for a power attack, R for a normal hit.

Since the goat is angry, it needs to let it out and have its revenge by hitting boxes, barrels, humans, or other things that are given for you to destroy each level, with the targets getting more difficult as you go by.

Complete the levels by hitting all your targets before the time runs out, but be careful not to die. Start right now, become the angry animal, and don't stop here, we're always down to sharing more great games with you!