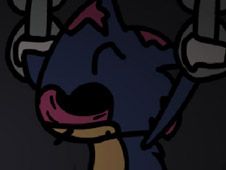 What is FNF: Sonic Left to Rot?

Another new FNF Sonic mod has just dropped, one called Left to Rot, where you sing with a Sonic that has been created after someone experimented with creating one, and because it was unsuccessful, it is now left in the dungeon, so you will sing in despair with him.

Sonic has been left to rot, let's sing with him!

When you see the arrow symbols that float match above your character's head, that is when you press the identical arrow keys to hit your notes, and if you keep on doing it until the song concludes, you become its winner.

Pressing keys too early, too late, or the wrong ones means missing notes, so know that if you miss too many notes in a row, you lose and have to start again from scratch. Good luck and all the best we want to wish you all now!