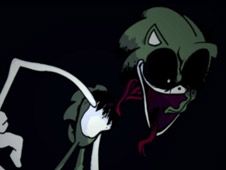 What is FNF vs Sonic.Drowned Deep Depth Riot?

Sonic.Drowned is an even scarier speedster hedgehog than the EXE version you see in the FNF Games category so much, and right now we invite you to defeat him and your own fears right now in this full week mod featuring the following songs:

Whether you are playing in the story mode or free play mode, to win you have to do the same thing, which is hit your notes according to the charts until you reach the end of the songs.

To do that, watch when arrow symbols float and match above BF's head, and when they do, press the identical arrow keys to hit your notes. Miss too many in a row, and you lose, so be careful. Good luck, enjoy!