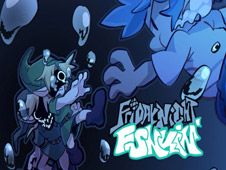 What is FNF vs Ben Drowned 2?

Ben Drowned is a character from Creepypasta whose origin story is that he is a Link from Legend of Zelda who drowned and has now returned as a zombie looking for revenge, a character that you and BF encountered by the lake, so you have to defeat him right now in a musical battle on the song known as 'Terrible Fate'.

Ben Drowned is back for another round, defeat him again!

Whether you are playing in the story mode or free play mode, the goal you have is the same, and it is reaching the end of the song by playing all of its notes since that is the only way you will have won when the progress bar will be fully towards you.

To hit notes, watch for when arrow symbols above BF match one another and press the identical arrow keys. Don't miss doing it too many times in a row, or you will lose and have to start again from scratch. Enjoy!