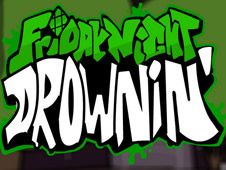 What is Friday Night Funkin’ VS Ben Drowned?

Ben Drowned is a creepy horror parody of Zelda's Link, which, of course, originated on the internet, and it is now the latest meme that Boyfriend will have to defeat in a rhythm battle, something that you will help him with the two awesome custom songs of this mod:

Boyfriend Vs Ben Drowned, an internet battle of music and horror!

After choosing to play the game in either the story mode or free play mode, give it your best to reach the end of the song by playing all of its notes according to the charts.

How? Well, you watch for when arrow symbols above BF match one another, and, when they do, press the very same arrow key. If you miss doing that many times in a row, you lose, so don't let it happen!

It's that simple, but if you're new to the series, we hope it was helpful, and we definitely hope to see you play more games with Friday Night Funkin' online when you're done with this one, only here, on our website!