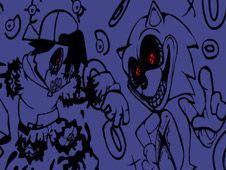 What is FNF CC Haunted Games 1 with Creepypasta Characters?

It's time to help BF defeat some of the scariest Creepypasta Characters, which are ghosts or demons of classic characters from video games, who live as creepy legends on the internet, and now you are going to have the following battles and songs:

In whichever of the two modes you are playing, to win you have to do the same thing, which is hit your notes according to the charts until the song concludes.

To do that, press the arrow keys at the same time as the identical arrow symbols match above BF's head, but don't miss doing it too many times in a row, or you lose. Good luck, enjoy!