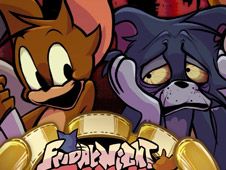 What is FNF The Basement Show (Tom & Jerry Creepypasta mod)?

FNF's The Basement Show mod features Creepypasta versions of Tom and Jerry for you to battle, meaning that these characters that are usually cute and friendly will now become scary and creepy, and we invite you to defeat them in a rhythm battle on the following tracks:

Let's start and win the FNF Basement Show with Tom and Jerry Creepypasta!

Make your choice between the story mode and free play mode, and then, in either case, give your best to play the notes of the songs correctly until they end to win. So, this means that when arrow symbols match above BF you need to press the identical arrow keys to hit your notes.

Be careful not to miss hitting notes too many times in a row, that will lead to you losing. Good luck and the best we wish you all, as always!