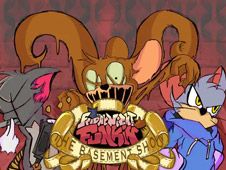 What is FNF The Basement Show V1.5?

An updated version of The Tom and Jerry Creepypasta mod called The Basement Show has now finally dropped for you all on our website free of charge, where we are positive that you will have a ton of fun together with these beloved children's cartoon characters turned evil, even more so on the updated tracklist with way more new songs:

Try the new FNF The Basement Show mod with Tom and Jerry!

Whether you're playing in the story mode or free play mode, you need to reach the end of the songs by playing their notes according to the charts to win. So, when you see arrow symbols match above the character on the right, you need to press the same arrow keys at the same time.

Be careful about missing notes too many times in a row, because if that happens you lose and will have to start all over again from scratch. Good luck and the best we wish you all, as always!