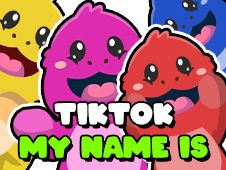 What is My Name Is?

You've probably heard of the most popular music challenge on TikTok: My Name Is, which was created based on a Youtube video posted by D Billions Kids Songs. The video is about four characters dancing to a certain rhythm, in a certain way depending on the musical notes of the song.

Play the game My Name Is: Chicky, Cha-Cha, Boom-Boom, Lya

In order to win the game, you will have to pay close attention to the rhythm of the song and the colorful squares that light up at the bottom of the game. In order to earn points, you will have to synchronize as well as possible so that you can click on the colored squares exactly when they light up. If you manage to press the colored squares exactly as they should, you will notice that the song in the game will continue to play, but if you fail to synchronize you will lose and the music will stop.

If you press wrong once, you have the opportunity to resume the song exactly where you lost it, but if the mistake is repeated a second time, you will have to start the game from the beginning. At the top of the game, you have the score you managed to reach; try to get as high a score as possible and at the same time unlock all the achievements from the game.