FNF vs Pibby/Corrupted Phineas and Ferb 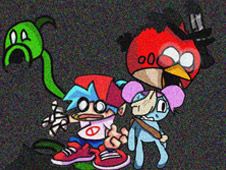 What is FNF X Pibby vs Red And Peashooter?

Red from Angry Birds and Peashooter from Plants Vs Zombies are two classic video game characters that you now have to compete against with BF in a rhythm battle, something that we are sure you will have plenty of fun, with as you help them get rid of the Pibby virus on the song called Birds And Botany!

As the song progresses, watch for when arrow symbols match above BF's head, and when they do, press the identical arrow keys to hit your notes, something you have to keep on doing until the song's conclusion to win. Know that if you miss hitting the notes multiple times in a row, you lose, so focus and win instead! Good luck!