How to Draw Gumball FULL 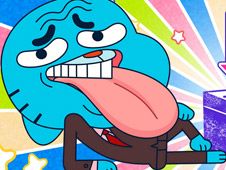 What is Vote for Gumball?

Vote for Gumball is not just something we would definitely do if this Cartoon Network character would run for president or any other position, but the name of one of his newest online games we're delighted to share with you here right now, where you're about to help him run a successful campaign, as that is not possible without the help, for sure!

Vote for Gumball and help him become School President!

The game has a total of six levels, and in each one, you will take it upon yourself to help Gumball defeat one of his opponents, until he becomes the sole candidate and the winner of the school president title.

Move and jump using the arrow keys, and as you walk through the hallways, grab the suit to look sharper, meet students and make friends with them to get their vote, and have Darwin snap photos of you.

You can change between Gumball and Darwin using the Z key, and if you want to pull a lever to open a path that was previously closed, press the spacebar next to it.

You can also use space to carry things, enter tunnels, or break obstacles in front of you. Sometimes you have to carry boxes, put them on the buttons to open doors or use them to get to a higher level.

Either avoid the enemies entirely or use Darwin to take flash photos of some of them to scare them away. A full-fledged platform-adventure game with an electoral spin is a new take on these games that only our Gumball Games category could have made into existence, so let the fun begin right now, it will certainly be something new and fresh!

Use the arrows, spacebar, Z key.