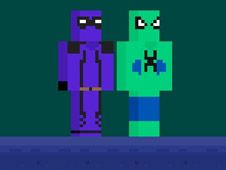 Noobpool & Noobspider is a game that aims to crossover superheroes such as Deadpool and Spiderman, otherwise known as Marvel's Team Red, all in one of our best new 2 Player Games that has been inspired by Minecraft Noob Games, with all of these elements coming together for one of our best new action-adventure games with platforms!

It's time for adventure with Noobpool & Noobspider, with you two players!

Use WASD to move and jump for one hero, and then use the ARROW keys for the same things for the other hero, and make sure that both Noob heroes reach the end of the courses in each level for you to win, because if even one dies, you both lose.

Avoid any kinds of dangers, traps, enemies, and obstacles to not die, such as the spikes or the creatures lurking around. On the other hand, collect the items to increase your score stage after stage, level after level.

Start all this fun right now and here, as only here is possible, and don't hesitate to tell your friends about our games too, we only bring you the best of the best!

Use the WASD keys and the ARROWS.