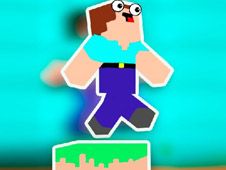 What is Noob Parkour 3D?

The Noob saw how much fun his Minecraft friends had by doing parkour 3D, so now he wants to try it as well, which is what you are here to join him in, having fun together by doing it since he is too young in this area to be able to do it himself, which is actually true for most things he does!

Do some 3D parkour with Noob!

Move the character using the WASD keys, and press the spacebar to jump. You have to use the blocks to jump over the lava, going from one block to another until you reach the end of the course, without falling into the lava, because if that happens you lose and die.

You've got a total of ten levels to complete, each one more difficult than the one before, and we're sure you will tackle them all with grace and have fun doing it!

Use the WASD keys, spacebar.