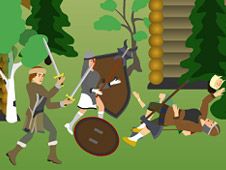 Feudalism 2 has everything you would want from a war game set in those times of kingdoms, knights, warriors, queens, and kings, such as war, fighting, betrayal, action, soldiers, and many more, which is why we hope you try this game right now, even more so since these strategy games don't usually also have RPG games elements as well, but this one does, so it is going to be truly something new!

Enter the dangerous but exciting world of Feudalism 2 online!

Before you start your journey, you need to choose the hero you want to become:

Yes, you have no less than TWELVE characters you can become here, one man and one woman for each kingdom or land, so everyone is invited to have fun! Move using the arrow keys, attack using the spacebar, and press the shift key to swap weapons.

As you go on your journey, win battles against other heroes and villains alike, conquer territory, grow a big army, and overtake all the lands you step foot upon, because that is what you would be doing in the feudal age. Let the historical adventure begin!

Use the mouse, arrows, spacebar, and the shift key.