The House of Evil Granny

Return Of Evil Granny: The School

It's Playtime: They are Coming 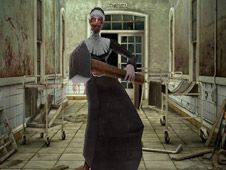 What is Let's Kill Evil Nun?

Let's Kill Evil Nun is a brand new horror-adventure game with action elements such as shooting, a game that is set in an asylum, where there are rumors of an evil nun haunting the place, so you're trying to prove her existence while also surviving her attacks, as well as that of her creepy minions and other creatures. Are you up for the task? It's scary, but also fun!

To prove the existence of this evil creature to the outside world you need to venture into this haunted place and collect no less than eight crosses and bring them back alive, as you avoid getting caught and killed by her and other dangerous monsters living in this evil and scary place.

You can either hide from the monsters or try shooting them down. Use WASD to move, the mouse to aim and shoot, R to reload, space to jump, shift to run, G for grenades, F to pick up items, L-CTRL to crouch, and X to prone.

Now you know how to control yourself in this first-person shooting game with monsters, so start the horror fun right now, only here, after which we hope to see you play even more games in this category, we always bring you the best of them!