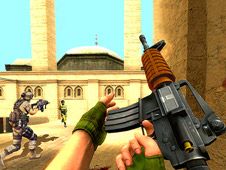 What is FPS Assault Shooter?

FPS Assault Shooter is one of the best shooting games online 3d inspired by Counter-Strike Games online that we are now happy to share with you all here free of charge, knowing very well that this category never misses the mark, just like we hope you won't either since missing to shoot your targets in this game means getting shot yourself instead and dying. Surely you want to win instead, no?

The game is structured into two chapters, so we've got a storyline for you, where you have to shoot down terrorists while rescuing hostages, while in the endless mode is just about killing the enemies so that you're not the one getting killed.

The missions in the first chapter are called:

Quite a lot, no? Well, we want you to have tons of fun here, and never get bored! Use WASD to move around, aim and shoot with the mouse, throw grenades with G, and use H to put on armor. Use the money you earn in the Guns Shop to buy new ones and become a stronger soldier as such. Good luck, enjoy!