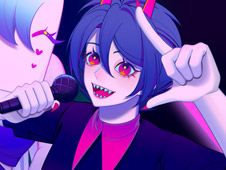 What is FNF Electronic Alcohol vs Pink Ghost?

Pink Ghost is the antagonist in a new anime-inspired FNF mod called Electronic Alcohol, which takes place in the in-game universe of the Starving Artist mod, and it features a ton of awesome new fan-made songs:

Whether you're playing in the story mode or free play mode, winning is achieved in the same way, by reaching the end of the songs, something you do by hitting your notes according to the charts until that point, doing si by pressing the arrow keys at the same time as the identical arrow symbols match on the top right.

If you miss your notes multiple times in a row, the health bar depletes and you lose, so focus not to let that happen, but become a winner instead. Good luck, enjoy!