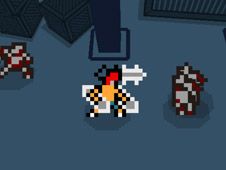 What is Chainsaw Man Fangame?

A Chainsaw Man Fangame was bound to appear sooner than later, considering that this is currently the most popular anime in the world, and we could not have missed this chance of sharing it with you all for anything in the world, that's for sure!

Try the newest Chainsaw Man Fangame on the internet right now and here!

Of course, you are going to be the title character, Chainsaw Man, who is a teen boy named Denji that made a pact with the Chainsaw Devil to continue living and uses his powers to hunt other demons. Help him slice his way through foes as well as three main bosses.

The game is a retro pixelated game where you use the WASD/ZQSD/ARROW keys to move and attack your enemies, slicing them with your chainsaw arms or even head, which is also a chainsaw. If they overpower you and defeat you, you are going to lose.

Try to make a big combo and defeat all the waves of enemies. Good luck we wish each and every one of you, and we hope to see you around all day long, since more amazing games are about to follow, only for you!

Use the WASD/ZQSD/ARROW keys for moving and attacking.