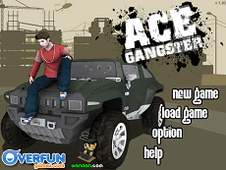 What is Ace Gangster?

One of the best GTA-like games online on our website is Ace Gangster, which is a 3d action-adventure game highly-inspired by the Grand Theft Auto Games series, and one of the best re-imaginings of this world, where you get to be part of organized crime, part of a gang and go on all sorts of missions while avoiding getting caught by law enforcement.

To walk with your character you use the w, a, s, d keys, press the spacebar for action, meaning interaction with the world around you, and you use Z to enter buildings. To ride a bike or drive a car you use the up arrow to accelerate, the right and left ones for turning, space to enter the walk mode, and R for the radio channel. If you are racing, use N for nitro.

You can use different kinds of weapons, and you can change between them using the number keys from 1 to 4, and you aim and shoot with your guns using the mouse buttons. Follow the directions on the map to get to your objective, such as robbing someone, stealing a car, taking part in car races, shooting rival gang members, and any other kinds of mayhem.

You can hijack a car using the right and left arrows in addition to the action key, moving the blue stick to unlock the cars, without touching the red pin. If the car alarm gets activated, you lose. Killing police, driving over innocent people, attacking buildings, are just a few of the things that can raise your wanted level. Clear it by staying away from police officers.

Other elements of this huge game include the fact that you can save money in the bank, which is not taken away even if you go to prison, you can repair your cars or upgrade them, while also being able to buy better and cooler cars, hijacking cars, exploding buildings, or raiding banks or attacking offices.

Your main goal is being the baddest gangster out there, and getting more money than the others, and taking over the biggest territory in the city. Good luck with all that!

With the arrow keys you will have to move on and with the SPACE you will stole a car.