Off the Rails 3D

Heroes of the City Jigsaw

Off the Rails 3D 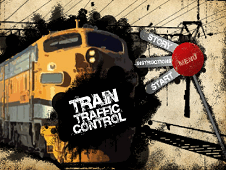 What is Train Traffic Control?

In Train Traffic Control, you play the role of a train traffic coordinator, and it’s up to you to ensure each train gets to its destination without any issues. Of course, you’re not only controlling the traffic for just one train, but a whole fleet of trains. Your goal with each level is to get each train to safety while collecting as much money as you can.

While this sounds easy on paper, Train Traffic Control is anything but easy. Fortunately, there are a few tips we can provide to ensure the maximum payout with minimal loss.

The Mini-Map from Train Traffic Control Is Your Friend

There’s a mini-map at the bottom left of your screen and it will be your friend when trying to manage the craziness that ensues on your game screen. You can pan left and right on the mini map as you can on the main screen, which helps a lot more than trying to do so while the anxiety of two trains pummeling towards a head-on collision clouds your mind.

Be Mindful of The Stop and Go Signals

When you click on a signal, it turns either red or green. The red light means stop and the green means go. If the light is green, then the train will continue unimpeded. When the light is red, the train will stop there. Make strategic use of this light when managing the traffic of the train. If you feel like it’s not safe for a train to proceed, then stop it for a minute, but don’t stop it for too long, as these trains have places to be.

Pay Close Attention to the Tutorial

We know that in most games; the tutorial is skippable, and people want to try to figure things out on their own. However, there are so many moving parts in Train Traffic Control that you’ll want to know what each thing does. There’s a lot on the interface to pay attention to, from the details of the train and where it’s going, to stations the train should stop at for the most money.

Now, keep your eyes on the track!

Use the mouse to control the trains.