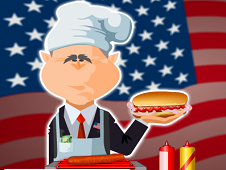 What is Hot Dog Bush?

This game starts with a short story about a former president, George Bush. He saw a man eating a hot dog, so he decides to open his own business. The games have more levels and the actions are in New York, the first level starts in the Bronx and for travel at the next level you have to get a goal based on money.

In the first level of the game Hot Dog Bush, you have to make just hot dogs, first, you have to grill the meat and prepare the bread. You must move quickly and serve customers on time, or they go away. More than going into levels, the difficulty changes you'll have more products like fried potatoes, juice, and more. At first, ketchup is the only sauce but you'll get another sauce in the next levels. Not all customers prefer sauces, so maximum attention.

To complete the Bronx, you have to get 150$ that is the goal, if this goal is not completed you failed the level. After the Bronx, there are still 4 levels like "Times Square", "Wall Street", "Yankees Stadium", and "Central Park" and the goal increase at every level. After you go through a few levels, you'll have the opportunity to prepare burgers as well. So, in the end, your small business will turn into a real fast food! In case you make a mistake or the meat burned, no problem, just throw it in the trash. In case the time expires and the goal has not been reached, the levels are repeated.

Do it all with the mouse, so you have to be very careful whit the customers and what you have to prepare. The less the customers wait, so more money you get. There are many characters, for example, old people, policemen, mascots, and young people. This game has two modes: "Career" and "Speed". In Speed mode, you can see how fast you are, but to play this mode you have to pass Central Park level. Help George, to make a lot of money playing Hot Dog Bush game.

Use the mouse to cook and serve the customers!

If you are playing from your mobile/ tablet, you will have to use your fingers to play!