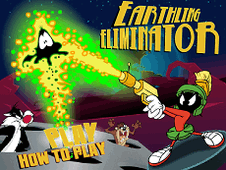 What is Earthling Eliminator?

Earthling Eliminator is the game that will not let you go away from the computer as it is very exciting. In this game you will have to control him Marvin the Marvian. He wants to shoot most of the characters from the Cartoon Network because they upset pretty ugly. Sylvester, Sam and other characters to play with him coming out and entering a chessboard. Using the arrow keys, you'll have to shoot as much as Marvin's gun with laser beams. Although it seems easy, it's not that because you have to move very quickly and have precision. This game is the levels. Each level has its own difficulty, so how much more you before, the degree of difficulty will increase and you will be able to collect more points, very important if you want to come in among the top players. Success! Hopefully this game is to your liking and invite you to try the other games on the site. Thank you!