How well do you know Iron Man?

Create Your Own Iron Man Suit

Which Avenger Are You

How well do you know Iron Man? 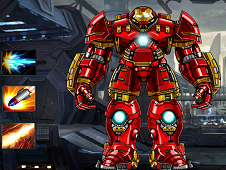 What is Ironman Hulkbuster?

Ironman Hulkbuster is a thrilling game appeared on our site, inspired by the new action film by Marvel Avengers 2. In this game of skill and precision you need to fulfill your objective successfully. In this film heroes are forced to fight one against the others to defeat evil. Ironman must fight the Hulk, to calm him because Hulk was influenced by enemies and now attacking innocent people. to have chances against Hulk, Ironman must build a bigger and more resistant suit because his strength is incredible Hulk. You have to put all the pieces in place to create new armor strong enough to beat Hulk. Then you must pull when Hulk appears. If not caught him will strike and you lose in life and if you run out you have to start playing from the beginning. At the top of the screen Hulk's life but also the life of Ironman.