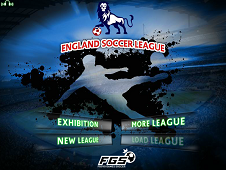 What is England Premier League?

From the famous EA Sports game FIFA, this is maybe the most extraordinary PC football game you've ever played in your life due to fact that is is absolutely great and realistic, but unfortunately it contains only the England Premier League. There are gonna be presented to you the best championship in the world, the England championship and it is normal because the football has been created and invented by the English people in the past. There are gonna be the strongest teams in the England like Liverpool, Manchester City, Manchester United, Chelsea, Arsenal, Everton, Tottenham or another great teams and your missions is to pick up one of them and to destroy the others by winning each game! Prove that you are the best football player, and using the arrows and the buttons A, S, D, W, conquer the most wanted title of the Premier League Champion, and be the best! Good luck and have a lot of fun while you are playing this awesome and awkward virtual football game alongside your favorite English teams!